Claus promised that the proceeds of the sale would be used to instruct the Mississaugas in the rudiments of the Christian religion and to provide education for their children. In addition, a portion of land consisting of 200 acres located in southeasterly portion of the Credit River Reserve would be set aside as a village site for the Mississaugas.

On February 28, 1820 Treaties 22 and 23, referred to as the “Credit Treaties”, were signed and the Crown acquired the reserve lands, which had been set aside in the 1805 agreement.

Treaties 22 and 23 were signed, once again, by William Claus, Deputy Superintendent General of Indian Affairs on behalf of The Crown, along with Mississauga Chiefs Acheton (Adjutant, 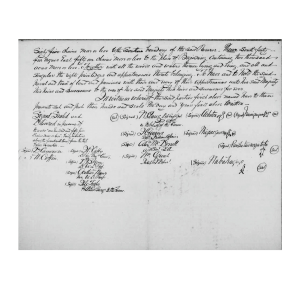 Tomorrow is St. Patrick’s Day, which offers us a wonderful chance to reflect on some of our city’s early Irish connections. There were many families who came to settle in historic Mississauga who originated from Ireland – and were of both Catholic and Protestant faiths. We had historic fraternal organizations with firm Irish roots established…

The Darker Side: The Jekyll and Hyde Chicken Farmer

Morris Gershon, a well-known Toronto poultry buyer, and his assistant, Murray Baker, went missing on June 19th, 1939. They have never been found, although police suspected that the pair met with foul play and were murdered. And they had their suspicions of who was responsible. Gershon’s abandoned truck was found along Highway 122 (Royal Windsor…

Welcome to our second installment of “Ask a Historian”. Every week Heritage Mississauga will be taking questions about the history and heritage of Mississauga which our Historian, Matthew Wilkinson, will answer on Thursday afternoons. #ApartTogether, Heritage Mississauga is the source for inquiries and curiosity about our beautiful city as we continue our mandate to research,…