August 15th, 2021 commemorates the 76th anniversary of the end of the Second World War for Canada but did you know there are a few significant dates that mark the end of the War for different countries around the world?

May 2, 1945 marked the end of the war in Italy and the Mediterranean. May 8, 1945 is known as Victory in Europe (or V-E) day, and marks the German surrender (Russia honours May 9 as the official date of the signing of the German Instrument of Surrender). 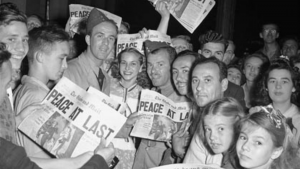 But the war was not truly over. With the cessation of hostilities in Europe, attention turned to Japan and the ongoing Battle of the Pacific.

Following the dropping of atomic bombs on Hiroshima and Nagasaki on August 6 and 9, 1945, Japan announced its unconditional surrender on August 14, 1945 – which was announced in the United States and Canada on August 15, 1945.

The formal Japanese surrender was signed on September 2, 1945. In Canada, Victory Over Japan Day (V-J Day), and the end of the Second World War, is commemorated on August 15.

In the United States, the date of commemoration is September 2.

Heritage Mississauga continues to research, record, and celebrate Mississauga’s connections to the Second World War and will be featuring many of our discoveries in the upcoming months!

Did you know? The Wheels That Power The Mills of Mississauga

Did you know that there are many types of water wheels and ways in which the mill can convert natural power (falling water) into mechanical energy? Mills have used different types of processes over time to convert flowing water into mechanical energy. The undershot wheel was the earliest and simplest, but least efficient form. The…

This too shall pass. As we are all challenged today by the COVID-19 virus, we will look back at past epidemics and health challenges, with a particular focus on those individuals who sought to aid the sick, and on how our landscape remembers those past times. Please help up capture to story of how COVID-19…

March 21 marked World Poetry Day. UNESCO first adopted World Poetry Day in 1999, with the aim of supporting linguistic diversity through poetic expression. World Poetry Day is the occasion to honour poets, revive oral traditions of poetry recitals, promote the reading, writing and teaching of poetry, and to foster the convergence between poetry and…

Join us on September 5, 2020 at 10:00 a.m. on our YouTube channel for “Our Boys: Mississauga Remembers the First World War” as Historian Matthew Wilkinson explores the life and times of soldiers from historic Mississauga who served and fell during the First World War. #ApartTogether we remember our fallen sons. This weeks Matinee is…