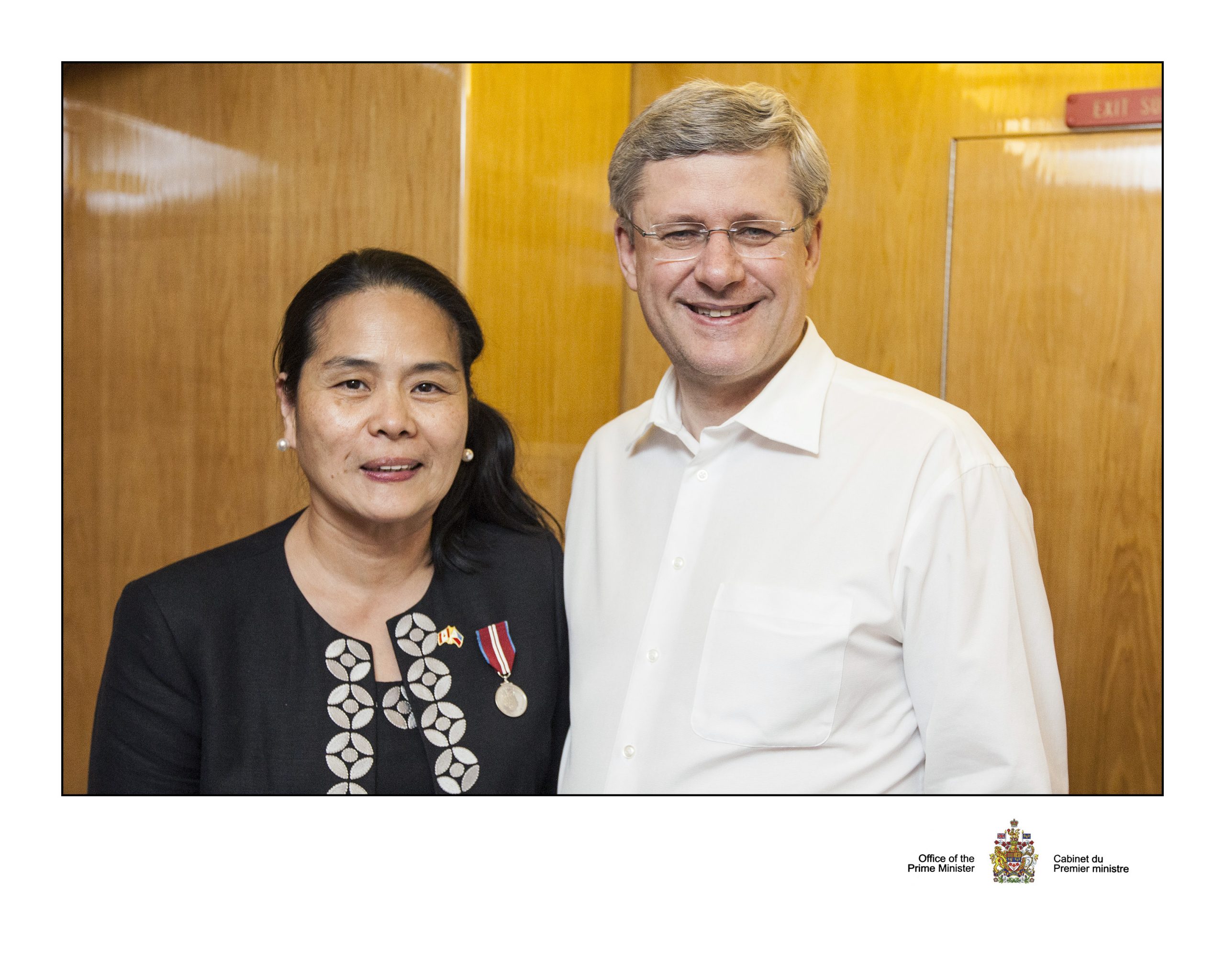 At the time Maria Guiao was 17 years old. After completing her Bachelor of Science in Pharmacy in 1977 and getting married to Engr. Dario Salvador Guiao in 1978, Maria and her husband would make the decision to take their infant son together and immigrate to Canada in 1980. 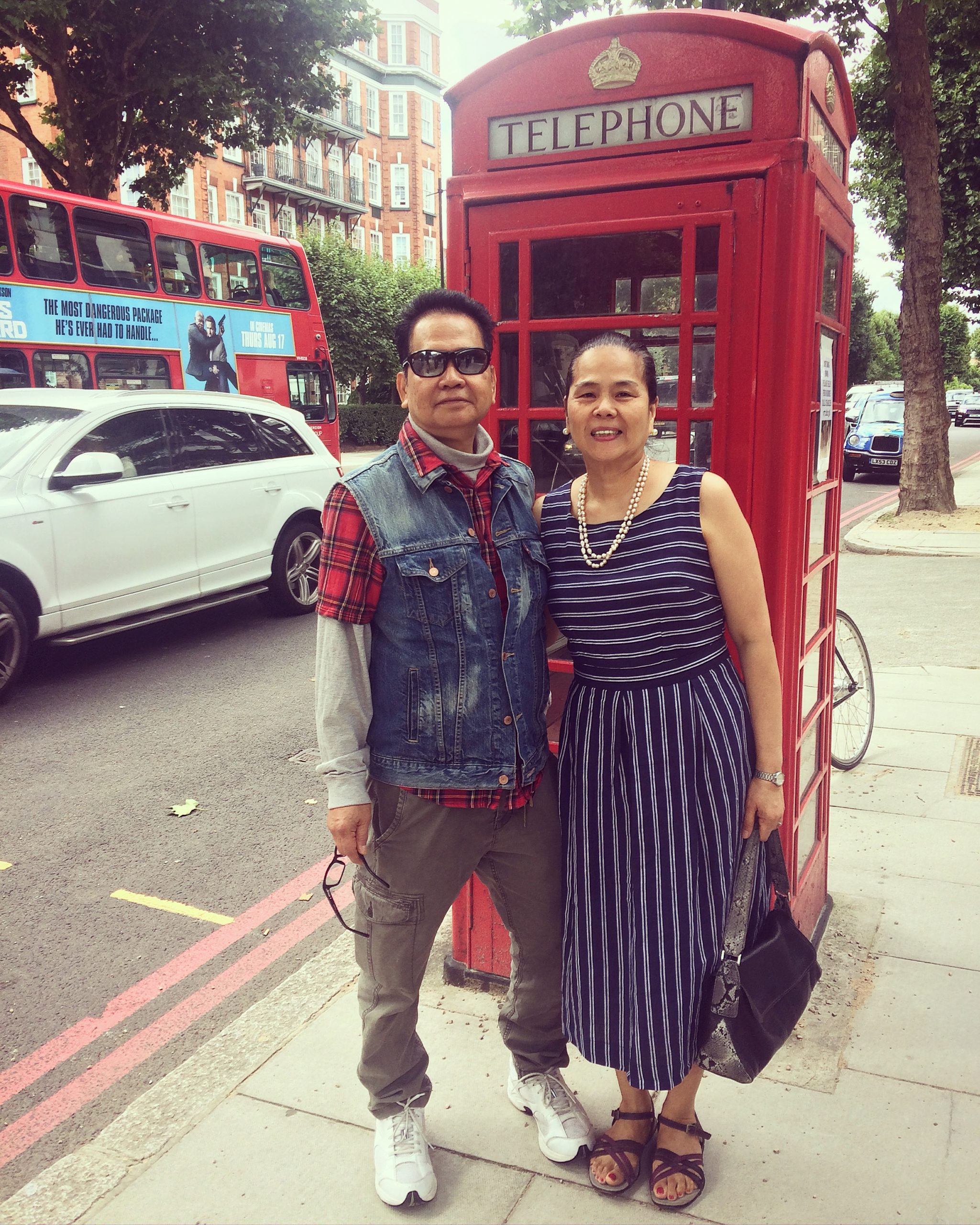 Maria A. Barin Laki-Guiao is the great granddaughter of Don Monico Mercado (1875-1953), who was a political leader politician, lawyer, poet, writer and educator in Pampanga.

Every May 4, is Don Monico Mercado Day in Sasmuan, Pampanga. Maria’s parents are Engr. Jose Mercado Laki and Fanny Barin-Laki. Maria is the niece of former Philippine Ambassador to the Vatican Leonida Laki-Vera.

Maria was was born in the Pampanga province of the Philippines in 1955. She grew up with her 7 siblings in Manila, after her family moved so they could attend school in Manila.

Dario Salvador Guiao, Maria’s husband was also from Pampanga, and they first met each other as youth. Dario has told Maria that she was his Dream Girl. From then on, they remained friends, but Maria had made a promise to herself and her parents that she would focus on school first and complete her degree before getting married.

Now Maria and her husband have been happily and successfully married for 44years. They have supported each other through many changes and their bond and love for each other is a source of spiritual, emotional and physical strength for Maria and Dario.

It was this bond that they both relied upon heavily when first arriving in Canada in 1980. It had been a difficult decision for Maria, moving across the world and away from her family. Dario’s brother (Renato Guiao), who was living in Canada, told the couple of the freedoms and great opportunities Canadians enjoyed. The contrast of this way of life, with the life they were living under Martial Law, was enough to persuade the young couple to give Canada a try.

Maria said, “Dario and I decided, that hey, we’ll try it, and live abroad, in Canada” 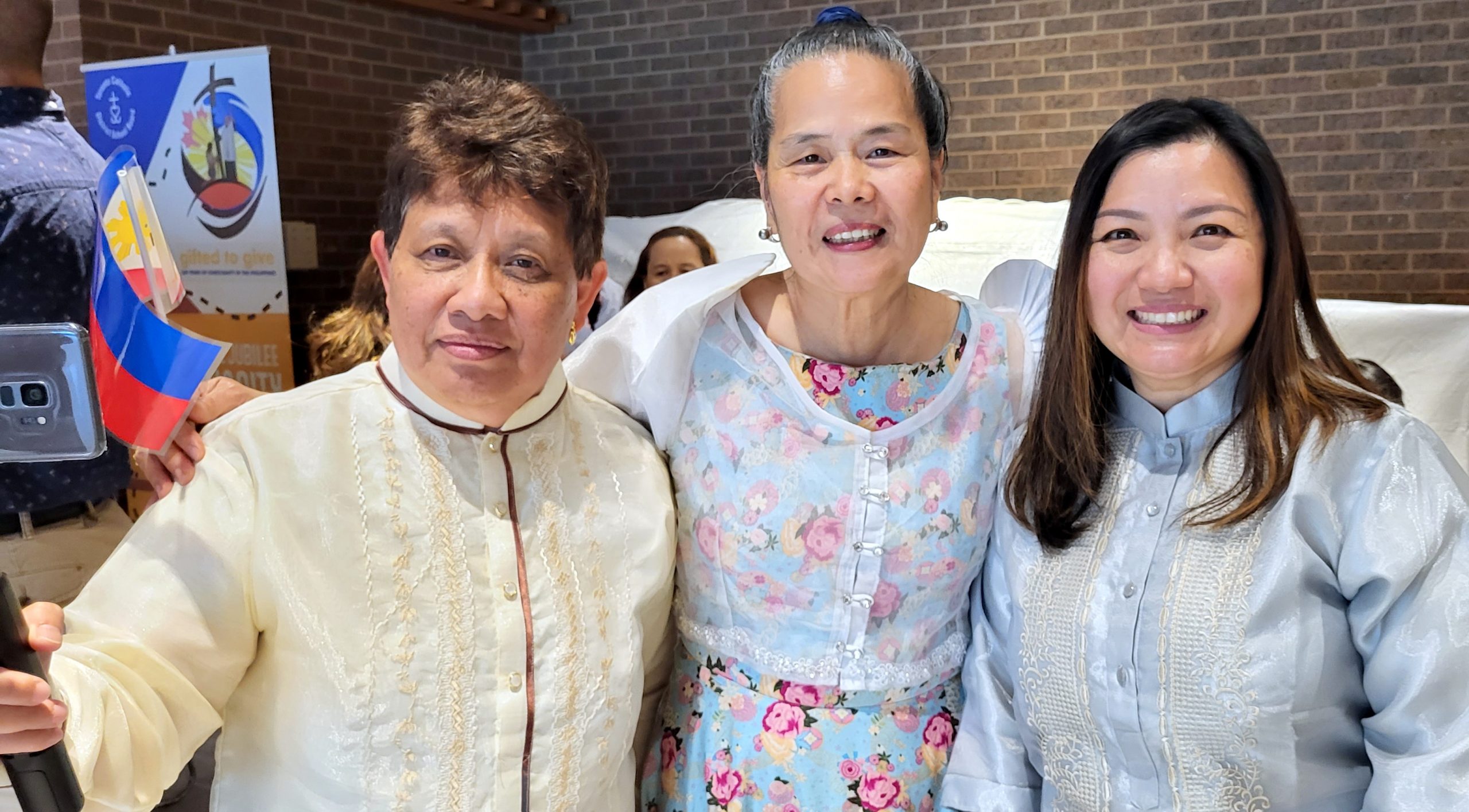 When Maria and her husband immigrated to Canada, they helped each other through the common feeling of isolation that many new immigrants feel. They were in a new place where they did not know anyone, they did not know where anything was, nor did they know what their future held here. Maria never expected her life in Canada to lead her to co-founding a registered charitable, non-profit, settlement and community service organization, receiving multiple awards, or travelling with the Prime Minister of Canada. Because of her selfless work to build up and uplift her community and help people in need, Maria would achieve all of this success. 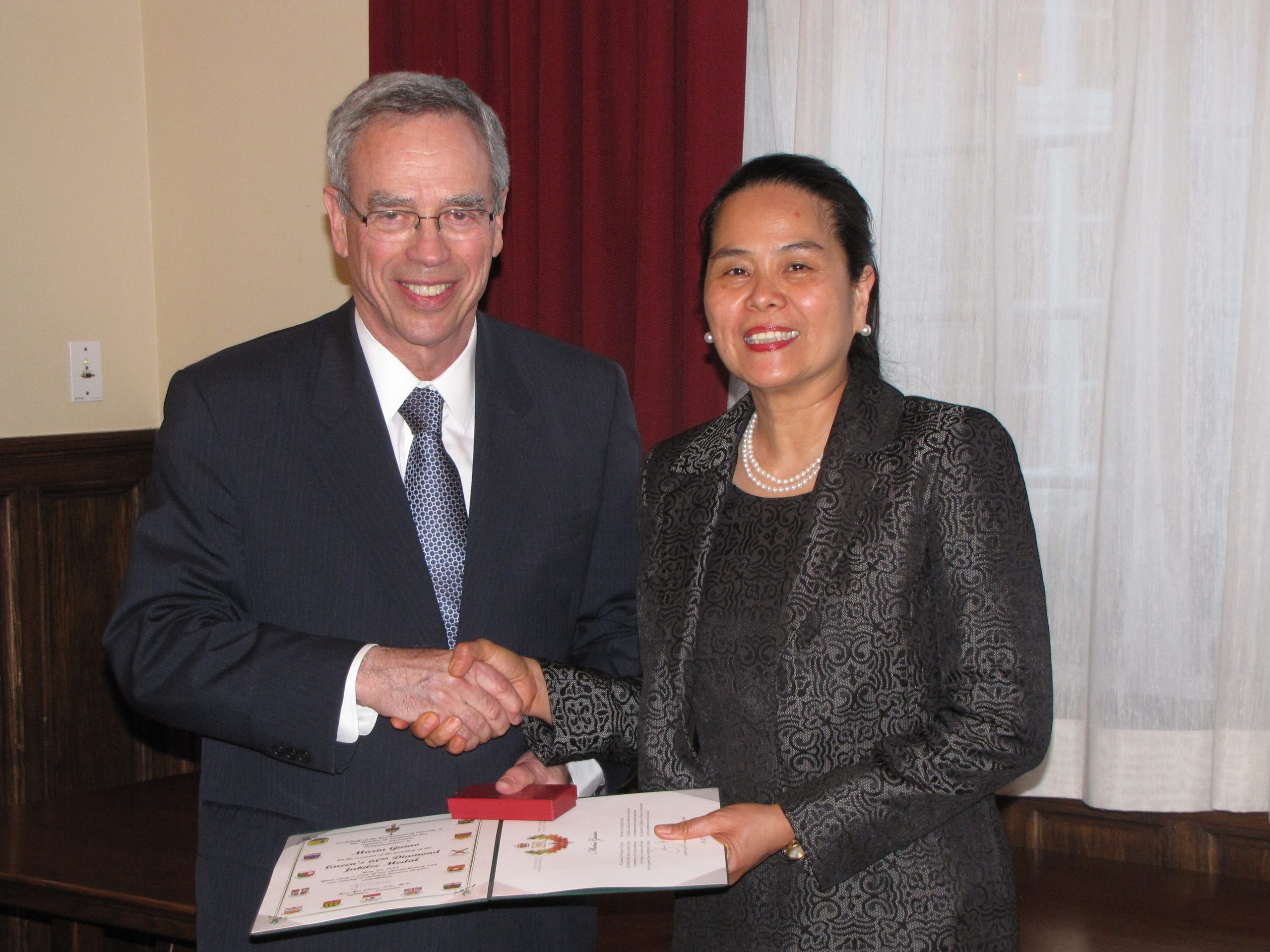 The freedom being offered in Canada was worth the uncertainty for Maria, but it did not make the transition easy. It was for this reason that Maria was always inspired to help new immigrants and co-founded the Filipino-Canadian Community House in 2004. When counselling newcomers at the community house, Maria does not do the talking, instead she listens. Maria listens so that she can know someone’s story, and from there she says, “’These are your choices. It is your life, it is your choice, it is your decision, and these are all the open books that you can choose and you are responsible for the consequences of whatever decision you choose.’” Maria demonstrates this freedom of choice because she values freedom and always has, and because she knows how important it is to build up confidence, conquering fears and stay on the right path when helping others.

Filipino-Canadian Community House ceased in-person programming during the Covid-19 lockdowns, but they never stopped helping people. They were available via phone, zoom, and email for assistance. In-person programming is now resumedwill resume in September, including workshops and one-on one sessions  information and referrals, health and wellness, food and nutrition, youth development and leadership, stress free exercises and line dancing, mental health and fitness, stories across generations, advisement on employment rights, job search and application assistance, and amazing monthly potluck birthday fun celebrations. Maria believes the Filipino-Canadian Community House is successful because they have committed, honest, accomplish, accountable, transparent and moving forward  Board of Directors,  volunteers and members. They are able to serve 3,000 people a year. The organization ensures that Filipinos  and public clients they serve have information, compassionate and caring services to assist them and a community around them, so they will not feel isolated. They are told from their members and clients served that there is a family feeling as soon as they enter. This ‘family caring feeling’ is due to the fact that Maria believes “we are one human equal family. No matter what you say, no matter what you do, no matter where you come from, we’re all human beings. One affects everyone. That’s the reality.” 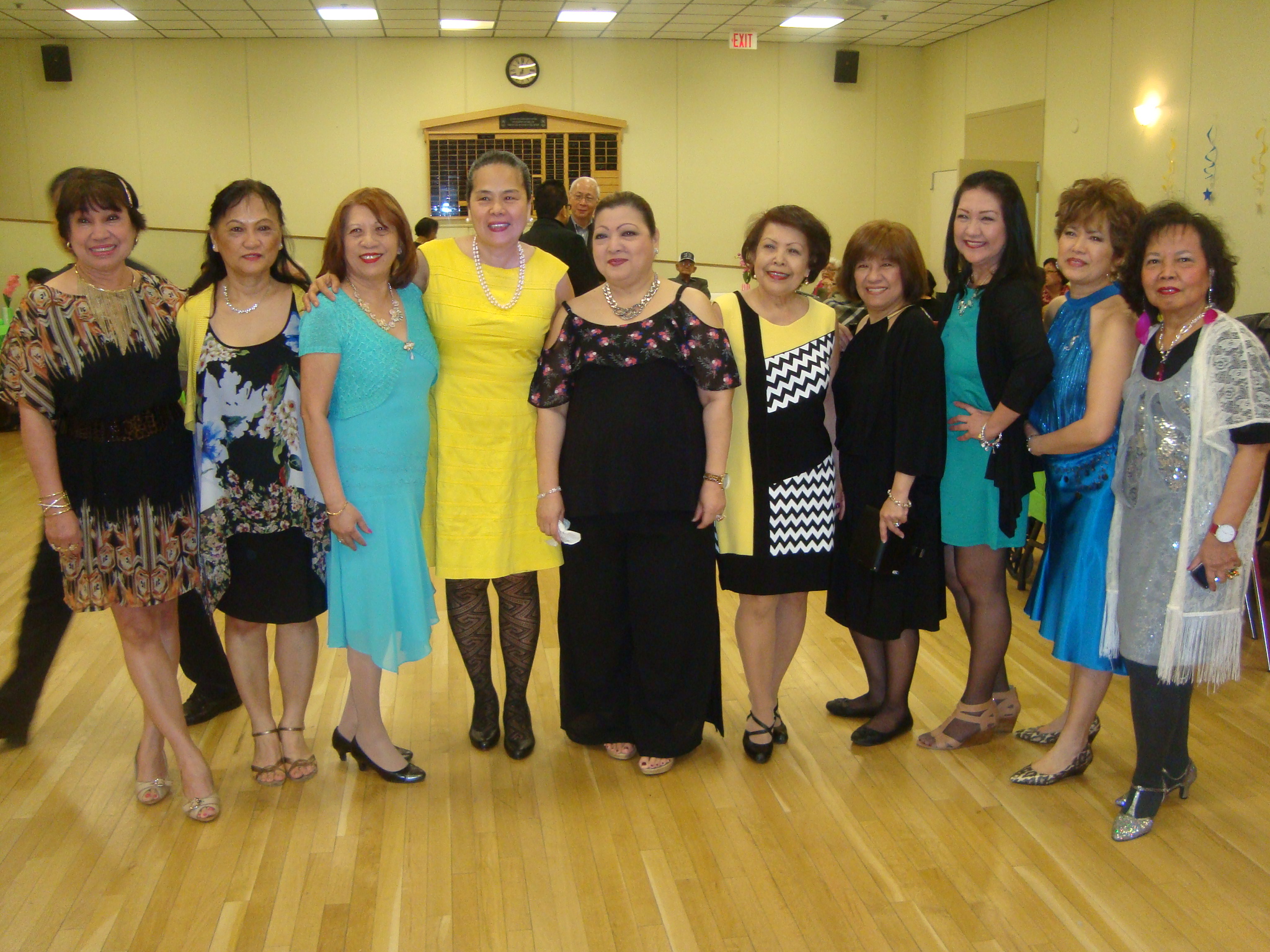 Maria’s beautiful positive optimism outlook on life and people can be traced back to her roots in the Philippines, where her parents raised her with strong values of faith, hope, and charity. As a child being taught in Catholic schools and in catholic university. It was always a part of her passion and goals to help others. She wanted to do something that would aid those in need. As a little girl, Maria would even find a way to help a small fly or a bird. Her parents always taught her that what you do unto others will be done unto you (Golden Rule). But Maria does not serve her community for the payback or recognition. For Maria success is not the praises of others or material items. She has learned to maintain an acceptance of her life as it is. She has faith that everything in this world is temporary, no day should be taken for granted and no regrets should be held onto. Life is a blessing! Everyday is a gift. Celebrate life everyday. Take one day at a  time. Enjoy everyday life. Every Human Being is a UNIQUE Human Being. Proud of yourself. Accept who you are. Be Proud of your Heritage. Life is beautiful! 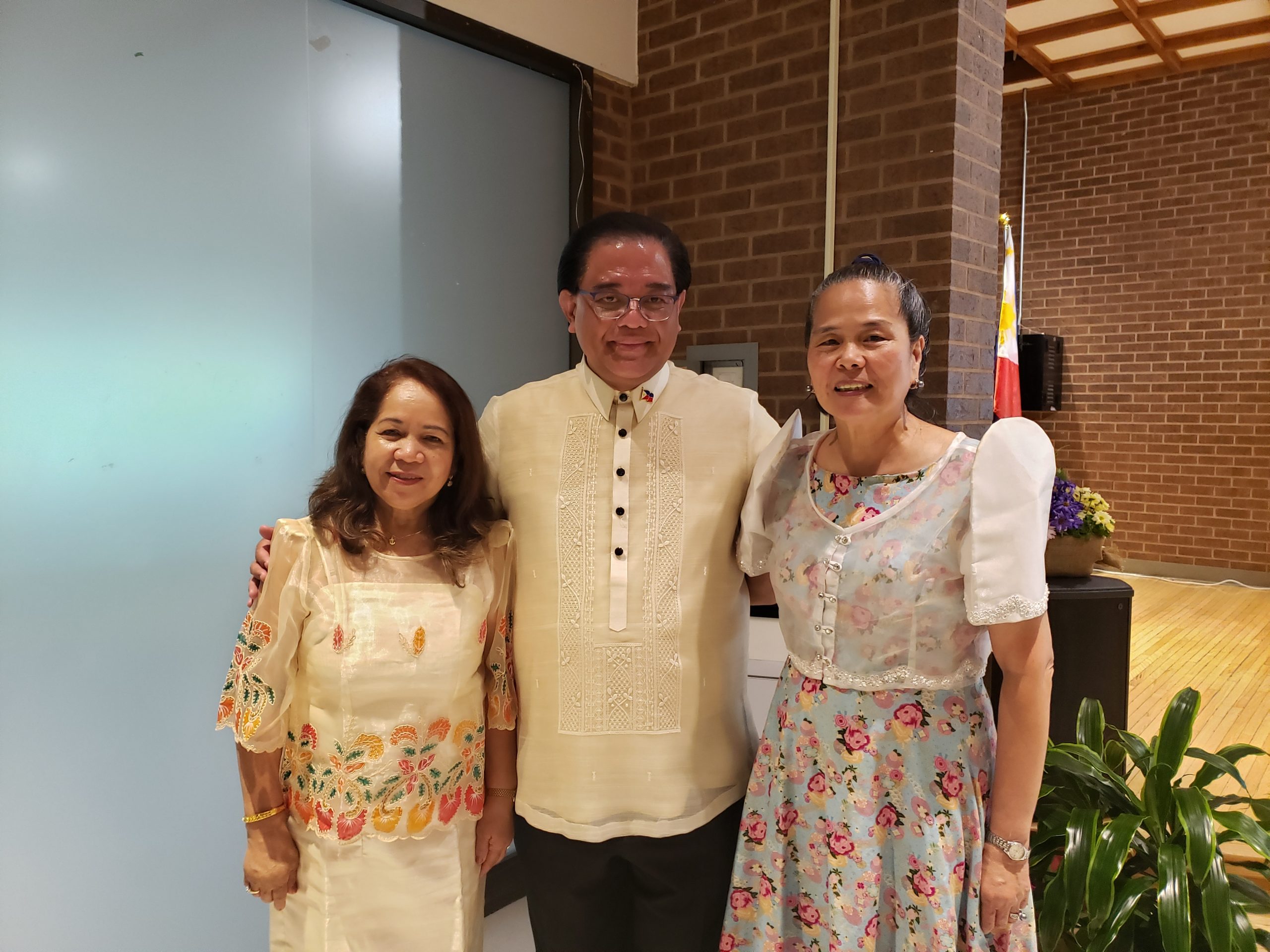 Maria brought this outlook with her to Canada. This piece of her parents, her upbringing, and her faith travelled with her and helped her to build a loving home and compassionate community. Maria knew, when moving to Canada, that she needed to be in a place where her church and children’s school was accessible to her. She and her husband chose a home that allowed Maria to serve the church and school. Maria was always working for her community and other charitable works . It is no wonder how Maria has been able to touch and assist so many.

Maria has been awarded multiple times for her volunteerism. Some of her accolades are: In 2006, Maria was awarded the Newcomer Settlement Volunteer Award from the Ontario Ministry of Citizenship and Immigration. In 2012, Maria was part of the Canadian delegation with Prime Minister Stephen Harper for his official trip to the Philippines, India, and Hong Kong.

And in May 23, 2012, Maria received the Queen’s 60th Diamond Jubilee Medal for her contributions to Canada and a 2017 Outstanding Canadian Awardee, for all her outstanding volunteerism and work  for the good of humanity and the world at large.  When talking with Maria, she is incredibly humble and grateful for these milestones in her life. Proud of her happy marriage, 4 Canadian university graduates children (Dario Jose, Mary Auxi, Mary Carl and Mary Ann, son-in-law Michel and grandson Charlie.  Her emphasis is much more on her unwavering faith, integrity, humility and resilience that she hopes to inspire in people. 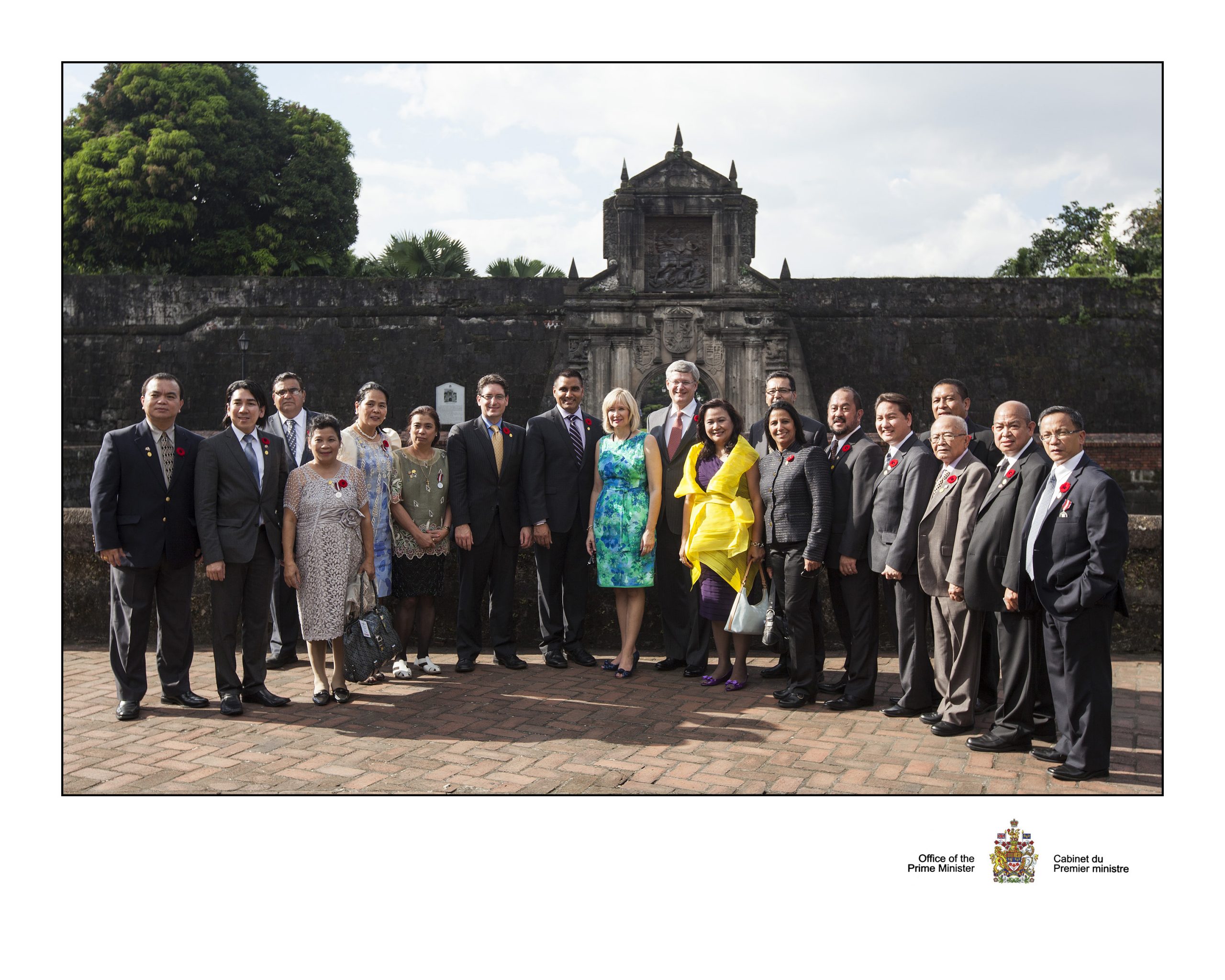 It is clear that Maria has achieved this goal already. People recognize Maria on public and private places, inside the airplane, events and  celebrations, medical and dental offices, hospitals,  the subway,  now and share their success with her because she assisted them and inspired them somewhere along their journey. She encourages everyone to, “believe in yourself, conquering your fears and there is so much opportunities for YOU and for Everyone”. 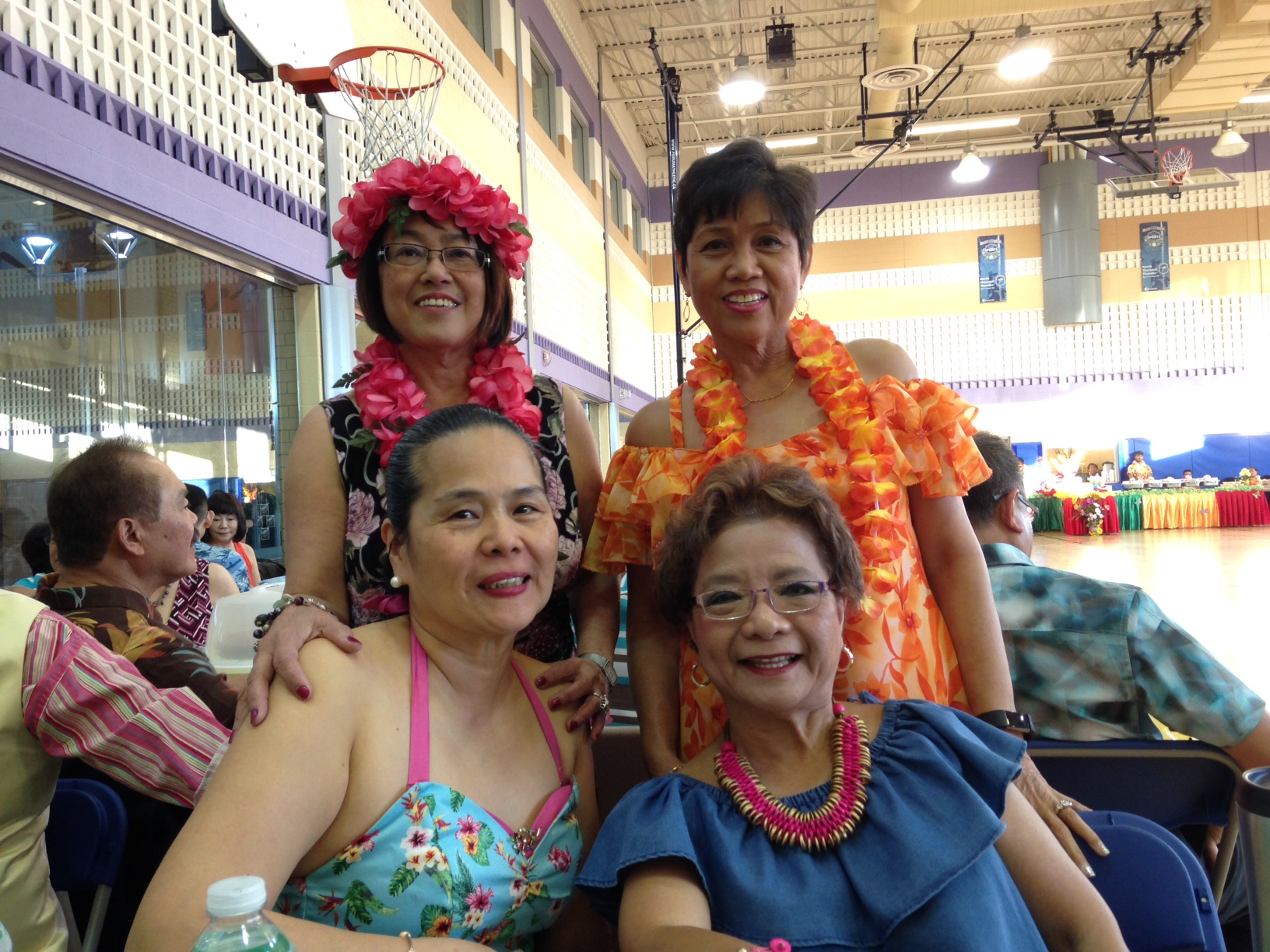 Maria’s work in the community touches people because she herself is an immigrant. Maria has experienced these challenges and trials and was welcomed by caring people too as a newcomer. Even after being settled in Toronto for seven years, when she and her husband were newcomers in Mississauga, she felt welcomed. Her new Mississauga neighbours welcomed her with introductions and gifts, just like in Toronto.

There is so much to be learned from Maria, her journey, and her work. Her life would have been very different, if she had never immigrated to Canada. It was in her new home that Maria found purpose helping newcomers going through changes she herself experienced. When people thank Maria for her work she says, “I learn from you. Do you know why? Because your life experience, I learn from it. That’s what makes us bonded together”, because she wants to thank you too. Maria recognizes that there is knowledge and self-improvement she gains from those she helps as well. 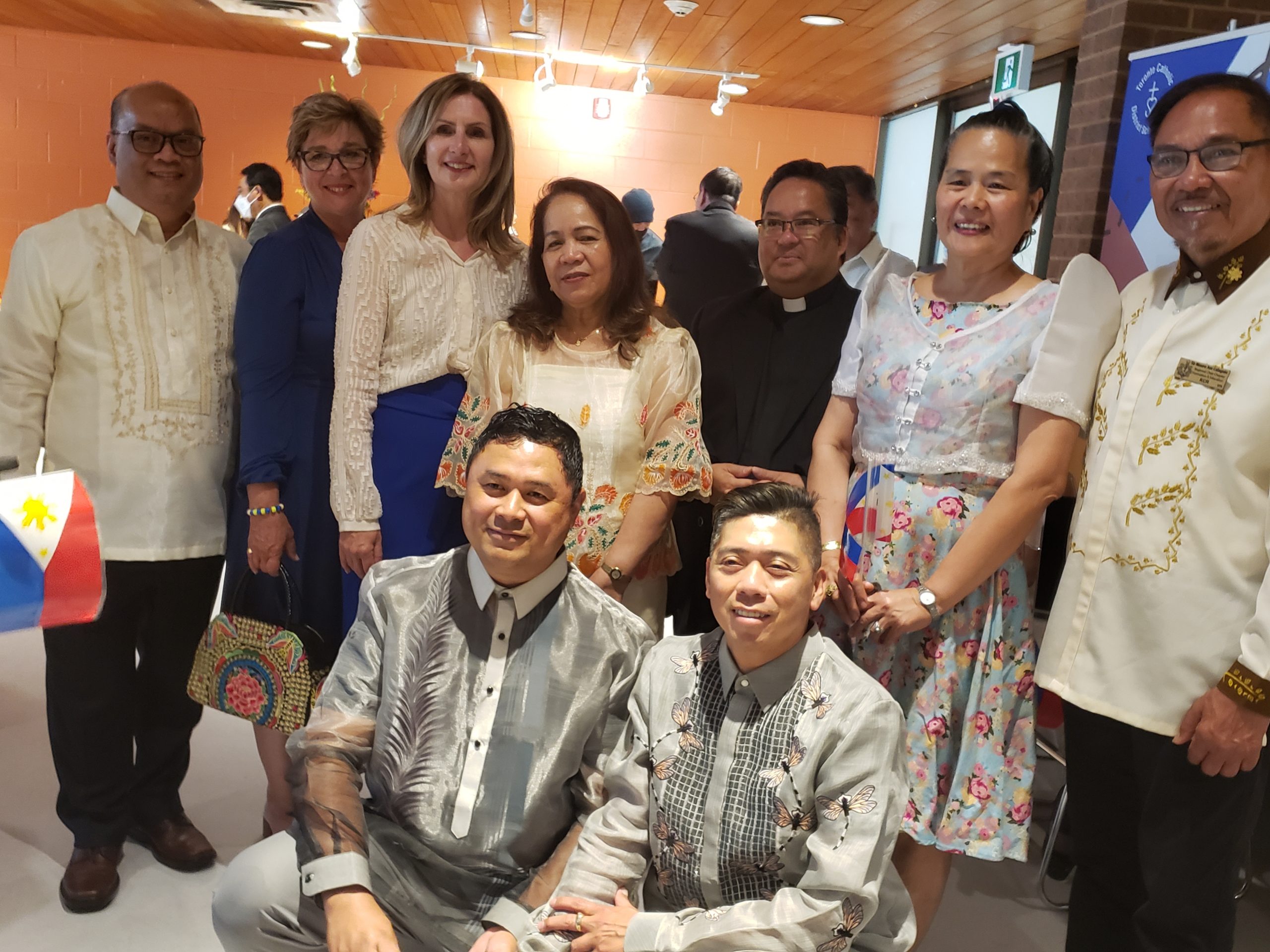 These are the daily check-ins Maria does with herself when she prays and plans her awareness daily life. Managing diet and lifestyle for body, mind and spirit, meaning taking care of your own self first, mind, body and soul first. Loving yourself first and taking care of yourself first herself mentally, spiritually, physically, and emotionally is a First to Every One’s Life.. To Share Love and Care , you must have it within yourself then you can share with others love and care..  Maria knows that she cannot help others if she is not at peace and happy with herself first.

Today, Maria and her husband have been living in Mississauga for about 35 years. Even though they are retired, they continue to work with Filipino-Canadian Community House and other needed charitable works.  Their immigration story of faith, integrity, humility and resilience is still inspiring people more than 40 years later. 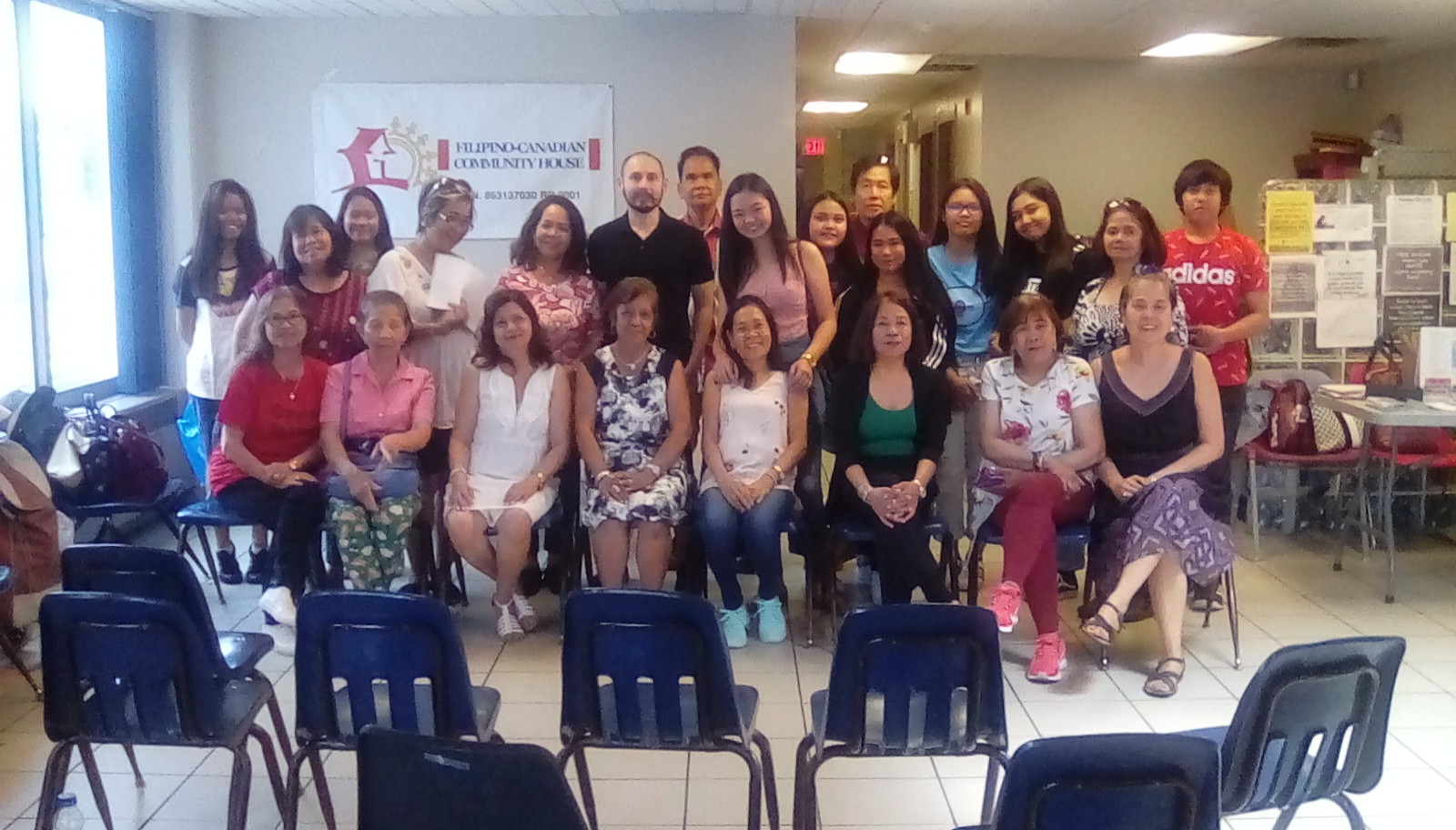