The Mississaugas are part of the Ojibwa Nation, in the Algonquian language family. They established themselves on the north shore of Lake Ontario between 1700 and 1720. During the American Revolution, the British Crown began purchasing large tracts of land for the incoming Loyalists. The first land purchase involving the British Crown and the Mississauga Nation was in 1781. By 1800, all that remained of the Mississauga’s territory was the “Mississauga Tract” which covered the land, from Etobicoke Creek to Burlington Bay.

In 1805, the British began negotiations for that last tract of Mississauga land. On August 2, 1805, the Mississauga and the British Crown signed Treaty 13-A, commonly referred to as the First Purchase. The British acquired a strip of land, from the Etobicoke Creek west, to Burlington Bay north six miles to modern day Eglinton Avenue. This became the Township of Toronto (now the City of Mississauga).

The Mississauga kept one mile on either side of the Credit River, the land on either side of the Twelve and Sixteen Mile Creeks, and the interior of the “Mississauga Tract” north of Eglinton Avenue. The fact that they retained the interior of the “Tract” enabled them to preserve their traditional means of subsistence. On October 28, 1818, the British Crown and the Mississauga First Nation signed Treaty 19. In this treaty, the British acquired the rest of the “Mississauga Tract” which was the land north of modern day Eglinton Avenue. This area included the “New Survey” in Township of Toronto (now the City of Mississauga) and would include the villages of Streetsville, Malton and Meadowvale. The Mississauga now only retained the three portions of land on the Credit River, and the Twelve Mile and Sixteen Mile Creeks.

The Mississauga fought to keep their land on the Credit River, and the Sixteen and Twelve Mile Creeks but two years later, the Government negotiated for those lands as well. The recent settlers in the area wanted access to the creeks and river to establish mills in the area. On February 28th, 1820, Treaties 22 and 23 were signed.  The Mississauga retained only two hundred acres on the east side of the Credit River. The ‘two hundred acres’ was never surrendered and became a land claim in the 1980s, for which the Mississauga received twelve or thirteen million dollars.

Today the Mississaugas of the New Credit First Nation celebrate a vibrant and resurgent culture with strong ties to their ancestral home along the Credit River and what is today the City of Mississauga. 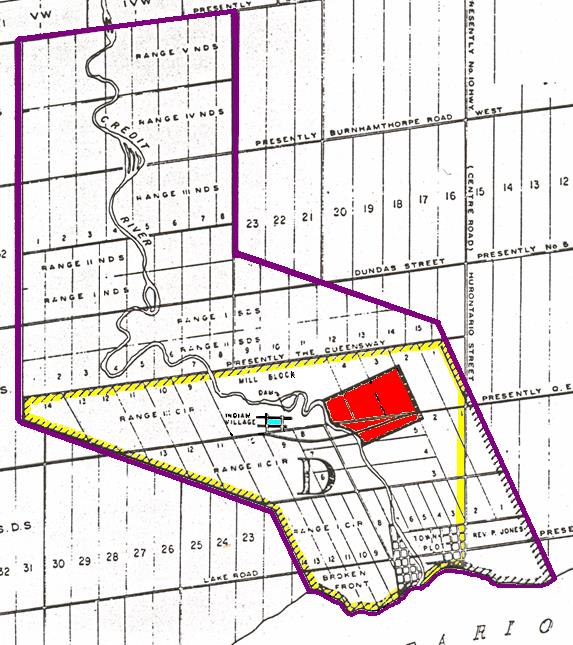 Purple: One-mile tract on each side of the Credit River reserved by the Native Mississaugas in Treaty 13A, signed on August 2nd, 1805.

Yellow: Part of the area ceded on February 28th, 1820, in Treaty 22. This entire area is known as the Credit Indian Reserve.

Red: 200-acre reserve set aside solely for the use of the Native Mississaugas in Treaty 23.

Blue: Site of the Government-built Credit Indian Village, or the Credit Mission.