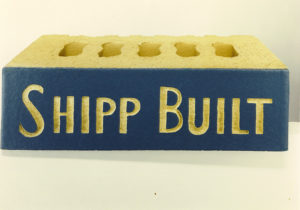 By the early 1950s, Gordon Shipp and his son Harold eyed up building a new upscale neighbourhood west of Dixie Road and south of the QEW. The Toronto-based Shipp Corporation cut its teeth building houses in Toronto, but when they paid $40,000 for 23 acres in Toronto Township in January 1951, a lot of people thought they were crazy. Who would ever want to live west of Dixie Rd?  As it turned out, quite a few. The tract was not zoned, raw agricultural land that had been planted in apple orchards, and Harold Shipp, the recently deceased chairman and CEO of Shipp Corporation Ltd., said getting it rezoned “took an ungodly amount of time!”

It was two months before Toronto Township rezoned the land for residential. Harold Shipp remembered hand-carrying plans into the township’s one-man planning department before noon to get building permits inked that afternoon. Now it commonly takes a year to get a permit. 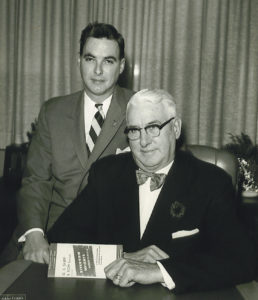 When the Shipps built on the north side of the QEW in the spring of 1952, they set up what seemed like a carnival with a PA system, a big tent and 10 of their own salespeople. It paid off: they sold an unheard of 126 homes in ten days, and over 800 in all.

The Shipps built 853 houses in Applewood Acres, and went on to build houses, apartments and commercial buildings throughout the city. The company even begat another: Kaneff Corp., another great Mississauga builder.

The great builders probably never envisioned Mississauga becoming Canada’s sixth largest city. But the post-war housing shortage made it pre-ordained for growth, allowing men like Hancock, McLaughlin, the Shipps, and Kaneff to come along with the bricks and mortar.

Many might not even know them anymore, but they are a part of Mississauga’s DNA and their legacy will live on for years to come.