The Story of Our Drum: Little Eagle Feather

Many of our male youth from Mississaugas of the Credit First Nation membership have been involved with the community youth drum since 1987.   The head youth drum caretaker was my oldest son, Derek King, who passed it onto my younger son Jordan Jamieson.   Jordan in turn passed it on to my grandson, Tyrell King who is now our drum keeper.

We have travelled to many places in Ontario and especially in our Treaty Lands and territory.  The drum group is invited to sing honour songs for many, such as: Chiefs of Ontario, Assembly of First Nations, AIAI and other Political organizations, Buffy Saint Marie, David Suzuki, INAC / Provincial government officials, Veterans, Other First Nation Elders, Educational Institutions, and other organizational such as Pan Am / Parapan Am Games 2015, etc.   My role is the Volunteer Community Youth Coordinator for the youth drum group since 1987.  One of our elders, Kenny King had a sweat and name ceremony for the youth.

Little = the males were young, young dancers represents revival of our culture and life ways

Eagle = carries spirit of our people into the future

We asked the creator to allow our young males to hit the drum to make the sounds of the heart beat and to carry their voices to the creation and for everyone to hear and send out messages to the creator. It is always an honour to be asked to bring the drum out and to sing on the drum. The drum has been offered tobacco from many various organizations, our community, our band members, other First Nations, so we continue on with the journey. We have a lot of support from our elders in the community; this shows how they pass on teachings with love and knowledge to our future generation.

Our drum group had a sweat ceremony for our drum after we completed a seven day teachings on the drum with the boys. We also had Orval Looking Horse smoke a piece pipe for our drum.

Many people in the community support the drum group and have passed on traditional songs for the young males to learn; some songs learned from Elder Garry Sault Sr., Dan Secord, Mike Doxtator, Isadora Toulouse, James Shawana, and Ferguson Plain.  We have had workshops on drum etiquette and to have ongoing dialogue about taking care of our drum in a respectful way as we give thanks every day.

To understand drum protocols; the drum has to be considered in highest respect as a sacred being and is to be regarded and respected as such.

Drum etiquette is highly important. Southern drums are suspended by four posts, one for each direction.

Drummer and singers are expected to remain at their drum and ready to sing at a moment’s notice. A dancer may approach the drum with a whistle, fan or gesture of his staff over a drum to indicate his request for a song even if it is not that drum group’s turn to sing.

In some regions it is considered disrespectful to leave a drum completely unattended. Some drum groups do not allow females to sit down at their drum but welcome them to stand behind the drummers and sing backup harmonies. The reason for this teaching comes from a variety of tribal stories that tell the history of drumming. It is as each group understands it.

People bring water to the drummers and generally assist the singers as needed. The drum is offered gifts of tobacco during giveaways and drummers acknowledge this by standing. The drums are of major importance to any powwow. Drums are regarded sacred by the Indigenous peoples and are considered to have a spirit of their own.

The Great Spirit and the beating of the heart of Mother Earth denotes courage, strength and a spiritual quality that vibrates through every soul present and carries up to the Great Spirit the messages, prayers, gratefulness and joys of the peoples.

The “Drums” do not only refer to the instruments the drummers beat on to accompany the dancing and singing; they are inclusive of the circle of drummers and their drums from each Nation. 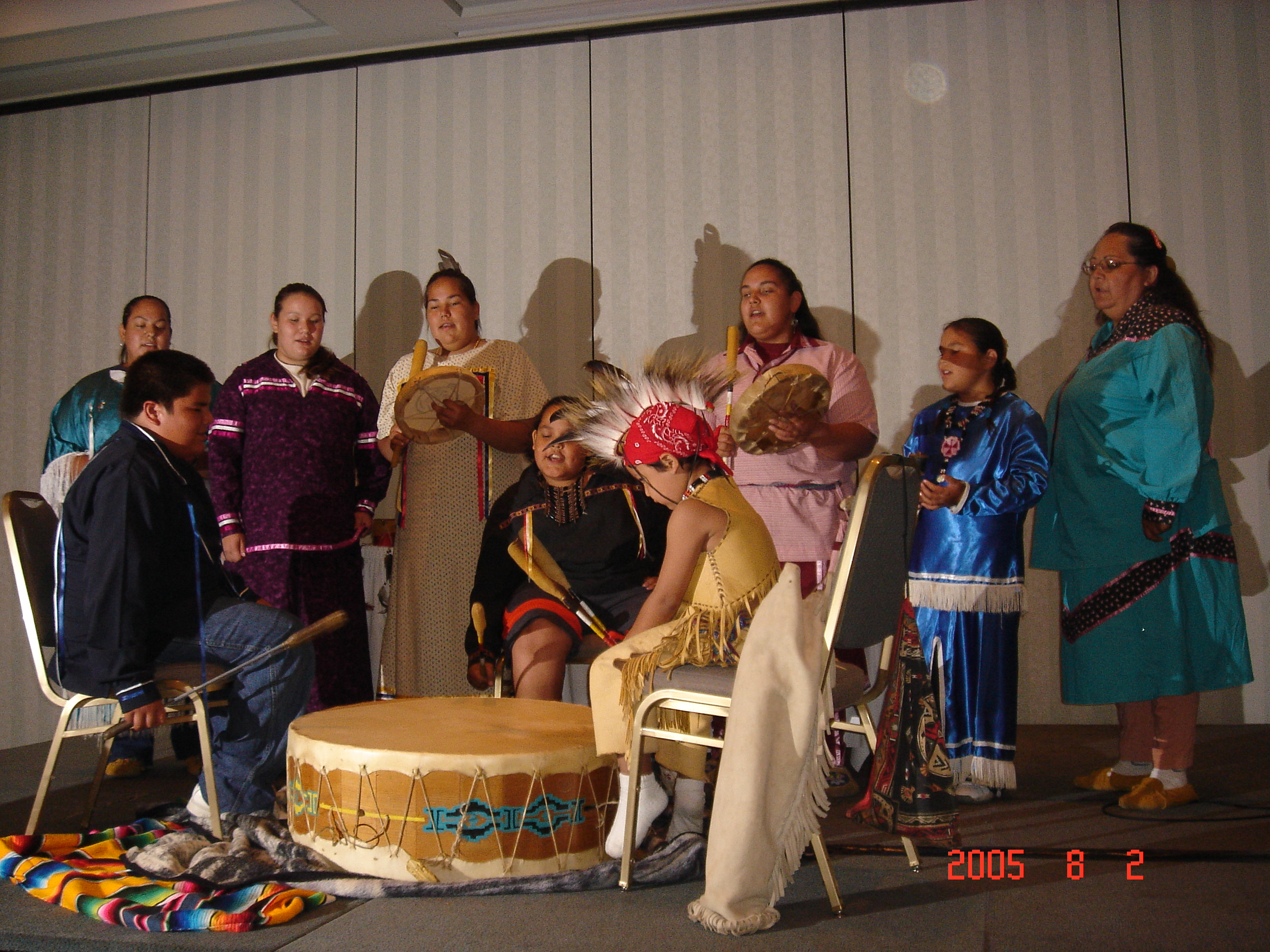 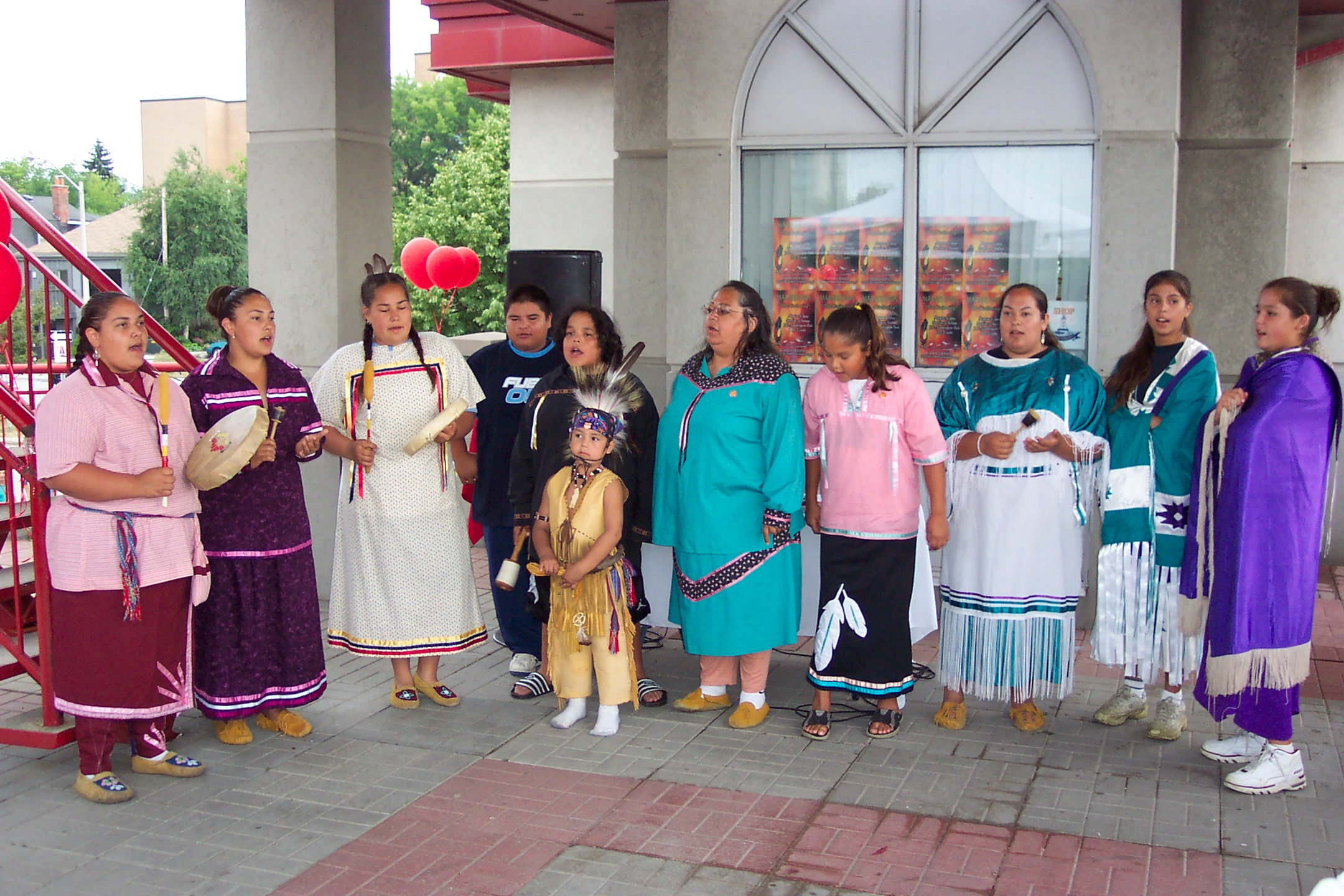