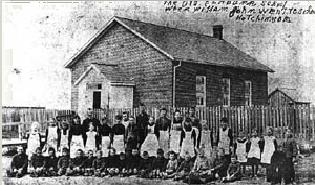 Elmbank was located near the historic intersection of Britannia Road and 5th Line East (Torbram Road), although the intersection no longer exists and its location is within the grounds of Pearson International Airport. Elmbank developed some traditional early businesses such as a general store, post office, school, blacksmith, carriage maker and a cheese factory. Elmbank was also home to two early churches, namely a Wesleyan Methodist Church and a Roman Catholic Church. Both cemeteries attached to these churches were relocated over the years as the airport expanded and the last vestiges of Elmbank disappeared.