Acknowledged as the Father of the City of Mississauga, builder of Square One Shopping Centre and constructor of the Mississauga City Core, S. Bruce McLauglin (1926-2012) had a vision. He was a visionary with compassion for his fellow man. In the late 1950s McLaughlin believed that an empty field at the corner of Highway 10 and Burnhamthorpe Road was the perfect spot to create a brand new city – “a shining example of how planning, public and private-sector partnerships, a little futuristic thinking and lots of hard work, could turn Toronto Township – then a collection of disparate communities – into a mega-metropolis, a utopian urban landscape” (Rick Drennan, Mississauga News, 10 Oct. 2014). 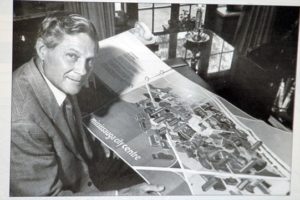 In 1969 Bruce McLaughlin, one of the biggest visionaries for Mississauga began building the Square One Shopping Centre. McLaughlin had large land holdings around the intersection of Burnhamthorpe Road and Hurontario Street which led to this being the chosen location for the shopping centre. The mall was completed in 1973 and Mississauga officially became incorporated as a city in 1974.

Mayor Hazel McCallion took leadership as mayor in 1978. Interestingly many people believed that Hurontario and Dundas Streets would become the downtown Mississauga core. This would have been likely, but a fire had destroyed the city hall in that location and Bruce McLaughlin, being the smart businessman that he was encouraged the city to relocate the construction of the new City Hall to Square One. He even provided the land for free. This officially cemented Square One as the new downtown Mississauga location. Complimenting the ever-modern approach of the city, the service and utility construction was placed underground, beneath the Square One region which was not common practice at the time. Bruce had explained that this was so future high-rises, and high-density buildings could populate the area. It’s this combination of ingenious forward thinking that allowed downtown Mississauga to blossom into what it is today at such an extraordinary pace.

Square One became a magnet for shoppers and a city landmark. City Hall was built next door. Corporations fell into line, moving into the gleaming new office towers on City Centre Dr. But it isn’t exactly how McLaughlin envisioned it. He wanted tighter streets, and walkways over Burnhamthorpe Road and he wanted to create the leafy feel of a city core.

McLaughlin did build the Mississauga Valley housing development in the early 1970s. On farmland with a few scattered houses, McLaughlin built a neighbourhood that seems inspired by Hancock’s vision with a circular boulevard and a linked system of parks that run throughout the development.

Over the years as the downtown Mississauga area gained popularity and as condo living entered the real estate space, a surge in Square One condos began and businesses started migrating to the area.

From 160 original stores, the mall is now the largest in Ontario covering 2.2 million square feet.   Over 320 retailers offering shopping, dining, entertainment and other services, are managed by Oxford Properties.  In keeping with current trends, there has been a recent move away from just shopping and towards providing a total experience; Square One now promotes itself as a “lifestyle destination” where the whole family can spend time together and be entertained as they shop.  It is now recognized as one of the top 10 malls in Canada and is an officially designated tourist destination.

A Look Back at Square One 40 Years Ago